skip to main | skip to sidebar

There is a particular sound that I have come to know and dread.
That awful restrained calling of your name. Pitched precisely to let you know that although something dreadful has happened either the caller doesn’t want you to panic, as they are not screaming uncontrollably, or it means they are too shocked to shout with full gusto.
Either reason, naturally, makes me panic more – present fears and all that.
The caller in question was the Better Half. I heard his cries coming through the study window from the veg patch where he had taken No. 2 daughter and Gargantuan Puppy.
As I raced up the path to the expected scene of carnage, traitorous thoughts raced through the noggin. An injury to the dog would be preferred, one to the Better Half acceptable but one to No. 2 would have been unforgivable.
So it came as a relief, possibly to both of us as he knows my views on lacerations to the children, that I discovered the BH holding out a pair of garden shears for my inspection with the wonderful words, “I think I’ve done something to my finger.” On the end of the blades sat two centimetres of neatly severed finger pad. His powers of deduction are undiminished.
Right-ho… to A & E then.
Dog in house, towels round remnants of bleeding finger, No.2 in car, BH in car, BH dead white, BH out of car, BH returns with bowl to save upchucking on car mats, BH obviously not all there, house locked, severed finger pad washed and now nestled in pot of ice. Off we go.
20 minute drive to hospital. BH has lost all colour in lips and looking a tad glazed at continued gushing of the blood from his mangled digit. I pull over. Hmmm… need something to shove on wound to stop red Niagara. Fortunately have just the right shaped flap of skin on ice. Unfortunately, no longer right shape. Now frozen flap curled like a salted slug. Only one way of thawing it out… Mmm…a tasty treat.
Love is…sucking the ice off your beloved’s fat pad.
Note to self – do not chew or swallow.
Pad slapped back on, pressure applied, blood diminishing, car in gear.
With encouragement from No.2 in back, “Faster Mummy, Faster!” reach hospital. Drop off BH by door, park, grab kid, leg it for the waiting room.
Where the wait was surprisingly short. It’s hard to tell of course, our watches were at home and prudently there are no clocks in the waiting room for you to measure your irritation at the passing time, but in short order we were ushered into a treatment room. The injury to the finger was not their concern. The BH’s alarming pallor was. Still white as a sheet, it would have been rather bad form to have him slump in a heap and cosh his head.
With the BH now reclining, and blood flow resuming to his brain, Katie, the lovely nurse, peeled off the flap, washed and reattached as the BH related how he had managed to do it.
The blades of the shears were bent. He had been trying to straighten them. So, holding them apart by an open blade he had smacked the handle end down on the raised wooden board of the veg bed. The open halves had snapped shut, of course, and…
“I was only holding it lightly”, he said, “I didn’t curl my fingers round the blade, I could have lost one. That would be stupid.” No, no, of course not. THAT would be stupid.
By the time he’d finished so had Katie. The dressings and strapping meant that the BH was permanently ‘flicking the bird’. Oh how we laughed. We laughed again when I sadistically pointed out that it had been at least ten years since his last tetanus. Katie disappeared to get the dose.
With impressive bandage, arm aching from the injection and instructions to return on Monday we were released. I drove to MacDonald’s – just time for some much-needed sugar before we had to pick up No. 1 daughter from school. As I reflected on what might have been, one of the staff gave No. 2 a couple of balloons. So fingerprints lost – 1, Balloons gained – 2. We were up on the day.
No. 1 was annoyed at missing the action. On Monday we returned to the hospital with orders to photograph the gruesome bits for her. As our nurse was not to the lovely Katie but a woman emanating all the sympathy of a deranged Sergeant Major, I thought there would be plenty of photo ops. 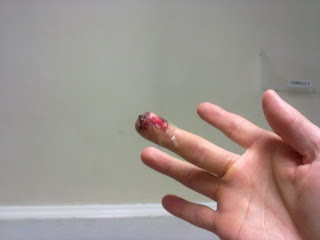 Wrong, she removed the outer wrappings of the mummified finger but left the rest in place and retreated to fetch the doctor.
“So, you tried to separate dogs then?” the doctor said as he inspected the damage.
“Err, no, garden shears.”
“Ah, right. So after the shears you separated the dogs.”
“Err…”
Who the mystery dog-separating hero was we shall never know, as we were distracted by the doctor saying, “Well, as soon as the end falls off you’ll be fine.”
Words that, in any circumstances, win the award for ‘least likely to offer comfort.’
When it drops off, perhaps I’ll re-freeze it. Now that I have sampled the forbidden fruit you never know when the urge might strike again. Mwah ha ha ha.
Posted by Susannah Corbett at 5:15 PM 6 comments:

A Little About Me

Susannah Corbett
I was born in London into a family of actors and followed them into the business. One of my first jobs out of drama school was being robbed by Robin Hood in Prince of Thieves. Since then I have appeared on the West End Stage and been in lots of television and radio programs. I live on top of a hill in East Sussex with my family. When I’m not acting or doing voice overs I’ll be in front of the computer writing. I started writing picture books for my children and Eve White, my literary agent, sent the first two off to publishers. Dragon’s Dinner illustrated by Lynne Chapman was published 20th August 2009 and One Cool Cat will be published in March 2012, David Roberts has done a fantastic job on the illustrations. I love writing kids books (nobody ever tells you off for daydreaming) and I am looking forward to writing more when I finish my current project, which is the life story of my dad, who was the actor Harry H. Corbett. 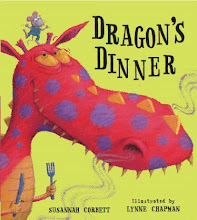